When I don’t know how to pray 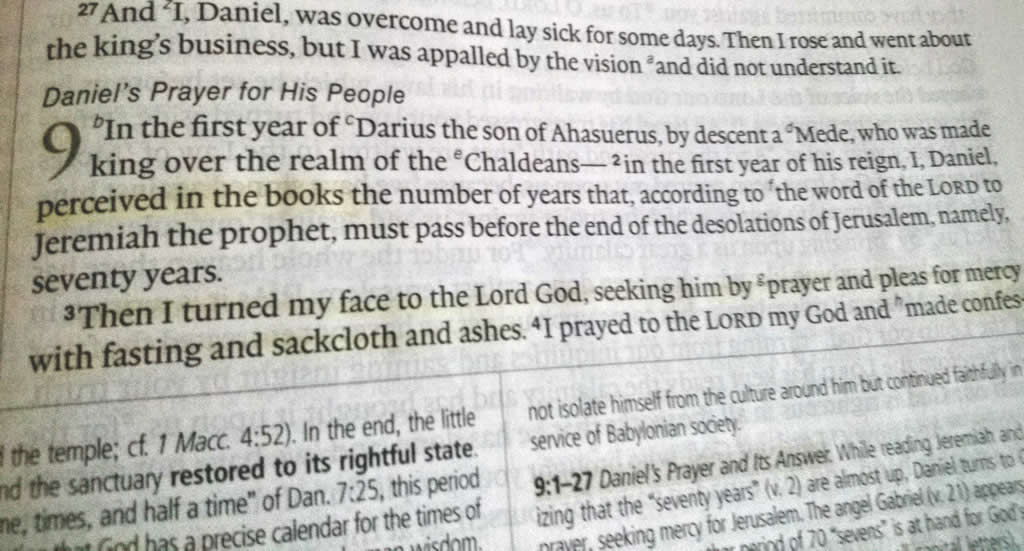 When I don’t know how to pray

Then I turned my face to the Lord God, seeking him by prayer.

What was Daniel’s life really like? He was abducted from his homeland as a young man, probably in his early teens. He and his friends were put under the Chief of the Eunuchs – the logical deduction is that as part of Daniel’s incorporation into the retinue of the king of Babylon he and his friends were made eunuchs. Daniel was also a slave. No matter what position he was given it didn’t change the fact that he was owned by the king. Reading between the lines of the book of Daniel he was down more than he was up – at times of crisis he was remembered, at other times he could be completely forgotten. With every change of regime, and Daniel suffered quite a few, Daniel would have lost whatever position he had (apart from the Belshazzar/Darius change, where things went the other way).

Why the background? To show that Daniel didn’t ‘have it good’. He wasn’t recognised by all around him as some giant of faith and righteousness. He was often hated, occasionally recognised, but mostly it was just him and his God. But God recognised him as a giant of faith and righteousness (see Ezekiel 14:14,20)! We need to understand how he came to be who he is while under the constraints that he suffered. We need to know that we have the same access to the same God that Daniel did, if only we would avail of that access.

It’s strange, but I struggle to read books on prayer – they just don’t seem to work. In one sense, it’s such a simple act that I wonder how someone can write a book about it, and yet in another it’s one of the most difficult acts for a believer to truly indulge in. I’m not going to write a book on it, but I do think Daniel exemplifies how we should go about it when we don’t know how to pray.

Daniel was at his wit’s end, he couldn’t see a way out of the domination by a succession of superpowers. He himself was powerless and subject to the whims of those superpowers. Where could he turn, where did he turn?

He turned to God’s word! “I, Daniel, perceived in the books” Daniel 9:2. We’re often told that we should listen before we speak. This is all the more vital with prayer. How can we worship aright if we don’t first remind ourselves of who God is. How can we ask aright if we don’t read of God’s sovereignty and grace. How can we seek God’s plans if we have not first imbibed them into our own souls?

Before we turn to prayer we must turn to the word.

Then, like Daniel, we can turn our faces to the Lord God, seeking him by prayer. Daniel used what he learned in God’s word to direct his prayers. He confessed not only his sin, but that of the nation. Remember that God chose a people, not just persons; we should pray for God’s people as a people. Daniel reminded God of the promises made in his word and asked God to fulfil them. We need to be seekers after God’s plans and purposes so that we can pray that God would fulfil them, we need to understand the times in order to see God’s providence in them and seek the progression of his kingdom.

Most of all, we need to seek God’s glory in our prayers, because in that is everything else made right. Our peace, our prosperity, our salvation and redemption, our future hope are all bound up in the God of this universe bringing about his plans and purposes. As we see the reality of this we will see the part that our lives play in the greatest story of all: God and his people. As we look at the world around us, and the church, which is God’s dwelling place on earth, till he comes, we can honestly pray with Daniel:

Now therefore, O our God, listen to the prayer of your servant and to his pleas for mercy, and for your sake O Lord, make your face to shine upon your sanctuary, which is desolate. Daniel 9:17

The prophet Jeremiah lived through the greatest disaster that befell the nation of Israel: the final stages of its conquest and exile. There was nothing left to hope in. In the throes of this disaster Jeremiah finds it easier to believe in God’s judgement & wrath than in his mercy & joy in his people. That is the state that Jeremiah is in when he questions God over buying a field, a possession in Israel, when all is lost (Jeremiah 32:25). He can’t see past the present judgement to a future hope. We can find ourselves in the same position.

God is straight with Jeremiah (32: 36-44) on the coming judgement, and equally straight about the future hope. Just listen to what God says:

Not every difficult time is a judgement on us, Job’s story proves that conclusively, but in every difficult time we have the promise of good through a faithful God who has fulfilled every promise he has made. When he promises “they will be my people and I will be their God” he will do it!

That this same God rejoices in doing us good and plants us with all his heart and soul should give each one of us cause to rejoice in him, and live in him and with him with all our hearts and souls.

In the depths of disaster and difficulty let’s hold on the the precious promises that God has already given us, knowing that he will fulfil them.